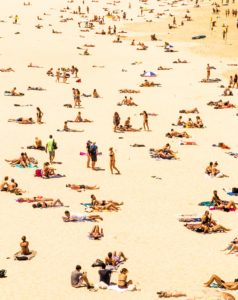 It felt as if the volunteer for the American Cancer Society had thrown a glass of cold water in my face.

In reality, she had simply spoken a truth that I needed to hear.

When she learned that next year is my thirty-year anniversary for recovery from malignant melanoma (the most deadly form of skin cancer), she encouraged me to attend an upcoming Relay for Life event.

Her response was, “Well, it’s not FOR you. Your presence will give hope to the newly diagnosed.”

My cancer was identified at an early stage because I like to read. I had my 18-month-old son at the pediatrician for a well-baby visit, and while waiting, I picked up a pamphlet about skin cancer.

When I opened it, I saw vivid color photos of the four warning signs of a cancerous mole. And I knew the mole on my left leg hit all four buttons.

I made an immediate appointment with an oncologist, and the results proved positive for melanoma. Surgery was scheduled for later that week.

The doctor, just after delivering the bad news, told me, “I’ve never had anyone be as calm as you are. Most people get upset or angry or cry or yell WHY ME?”

And I do recall being calm in my reply: “Why NOT me? Should I wish this on someone else?”

I made it my mission to become my own expert on skin cancer. Here are some facts.

According to the Mayo Clinic, use the ABCDE method to remember the signs of a cancerous mole:

Cancerous (malignant) moles may show all of the changes noted above, while others may have only one or two unusual characteristics.

Tanning does NOT protect you from skin cancer; it is a cumulative effect. Your skin cells are being damaged every time you’re out in the sun unprotected.

You owe it to yourself and the people who love you to have any suspicious mole examined by a dermatologist.

Some people don’t believe that skin cancer is that serious. And yes, there are varying degrees of seriousness for the various skin cancers. But left undetected, any type gets more dangerous.

Melanoma accounts for just 1% of skin cancers. But the American Cancer Society predicts that 87,000 new cases will be diagnosed in 2017. And nearly 10,000 people will die of melanoma this year. That’s serious, by any measure.

So while I’ll be attending my grandson’s graduation during this year’s Relay for Life, I’ll be there next year.

Because I am a survivor.

Because we all need hope.