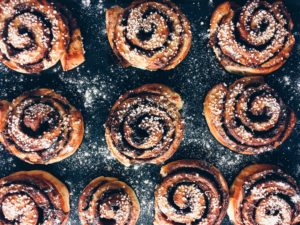 My sister Bev shared that as her whole family sat around their Thanksgiving table, someone asked, “What are we doing for Christmas?”

Bev’s grown son (who himself has adult children) looked as though someone had just made an inappropriate remark. “Why, we’re coming here, of course. Just like always,” he replied.

Many kids, even grown-up ones, really like to hold on to the traditions of the Christmas season.

I recall that after my own children were out of high school, I suggested altering the Christmas Day breakfast. My son Tim threw a fit. How could I even suggest NOT having cinnamon rolls as part of breakfast on Christmas?

Sometimes the cycle of life breaks traditions for us. As little ones grow up, get married, buy a home, and have their own little ones, going “over the river and through the woods” to Grandma’s house may lose some of the original appeal.

And as the Matriarch of the family herself ages, cooking, cleaning, and baking for a group of people (even those she loves dearly) begins–as the years unfold–to be a bit too much. I’m actually dreading the year that I start to feel those twinges that, “maybe this is the last year for this.”

We expect life to go on status quo. This time, this present, feels as if it will last forever, even as logically we know that to be untrue.

My Episcopal church uses handmade kneelers, and each one tells its own brief story of the person for whom it’s dedicated. Looking at the kneelers you can guess from the dates of his life and death, that this sailor did not survive World War II. And that young girl didn’t even make it to age eleven. This woman lived to 97.

After spending thirty years at St. James’ some of the people named on the kneelers I recall. But many I do not. That makes me feel a bit sad. These people, regardless of how long they lived, each mattered tremendously to their families and friends.

During the Christmas season we especially remember all those who are no longer part of our earthly family. They are a deep part of our traditions and in this way we feel a special closeness.

So yes, the Thatchers will still be serving cinnamon rolls for Christmas Day breakfast.

7 thoughts on “Because That’s The Way We’ve Always Done It!”