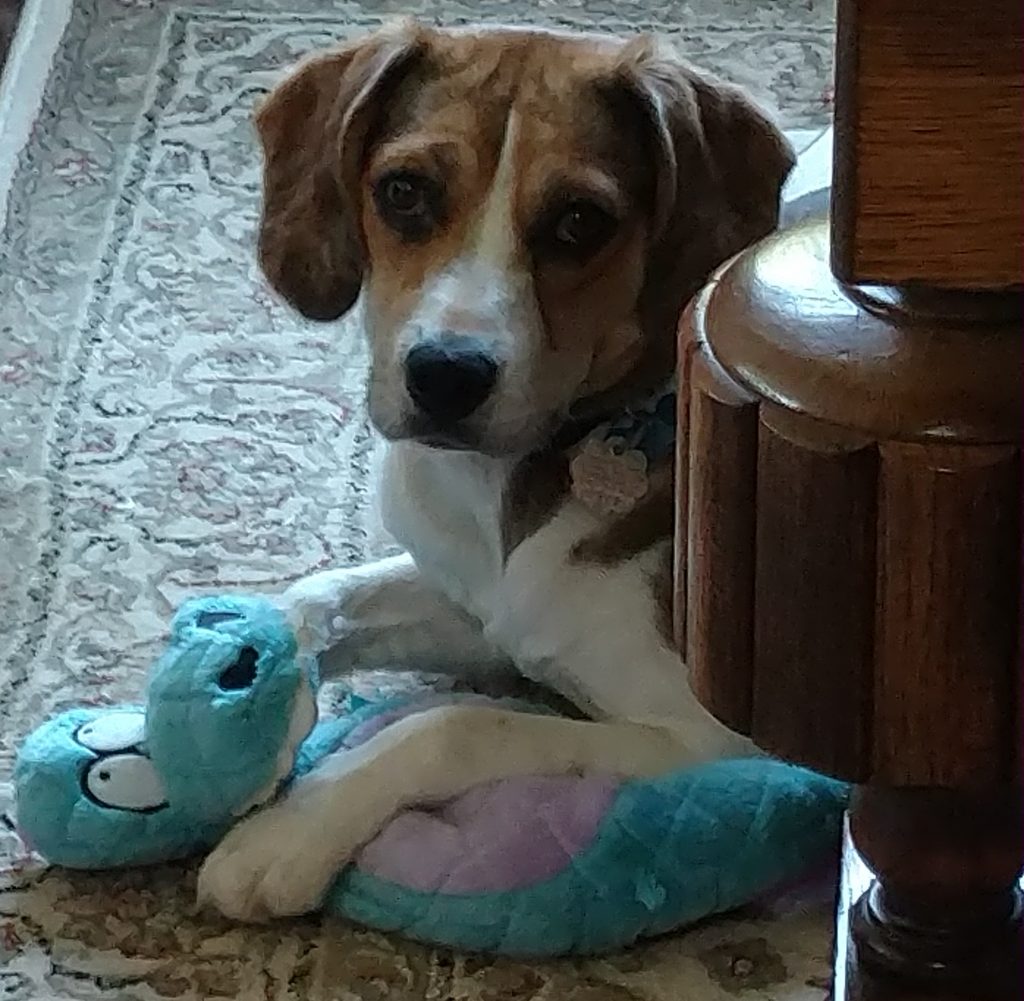 If you’re a regular reader you’ll recall that my dog Riley was diagnosed with an oral mast cell tumor the day after Christmas last year. I was devastated not just because of the highly probable outcome of death but also because we had subjected him to two unnecessary surgeries based on a misdiagnosis from multiple veterinarians.

When Riley died in January, I gave everything dog-related to the local animal shelter; my car was packed full. I swore I would never own another dog because the loss was just too overwhelming.

Seven months later a dog with the royal-sounding name Tatiana showed up at the SPCA shelter where I had begun volunteering. She had just been surrendered a few days before the hot August day my daughter Laura and I stopped by to walk and socialize some of the shelter dogs.

A little beagle mix of three, she acted more like a puppy. I could feel the little tugs on my heart as this full-of-life dog ran to fetch the ball as often as Laura would throw it. But I tried to stand firm since I didn’t want to take another chance of loving a dog.

Had it not been for Laura’s insistence to go back a second day to play with Tatiana, as well as her urging me to take a set of adoption papers with me, I do believe our home would still be dogless.

I’ve heard stories through the years of people whose dogs have died who then go out and replace their pet with as close to the original as can be found. And others have told stories that their new dog was as different as possible from the dog they had lost.

We renamed her Grace, and she is quite different from Riley. While he was quiet and aloof, she is rambunctious.  A friend kept her today while my husband and I took a day trip. The friend texted me shortly after we dropped her off. “She is so stinking cute!” That made me smile since it’s my own catchphrase for Grace.

This dog has an inexhaustible exuberance for life. I believe that’s the quality I admire most in Grace. Like most other humans, I can slip into a physical and mental laziness without even realizing it’s happening.

But when I see Grace make her own fun by tossing a stuffed animal from the bed and then pouncing on it, or throwing her head back to release a ball from her jaws so she can chase it, that reminds me that it’s good to move and play and have fun.

Loving is a risk. People can disappoint us, betray us. Our children are supposed to outlive us and pets are not. Sometimes the ones we love (human and animals) get too sick or injured to recover and leave us before we’re ready to let them go.

But love outlasts death. Love helps us find our way back to discover joy in a changed life.

Love is definitely worth the risk.

Article on why owning a dog is beneficial to your health

Article on loving your dog more than you love other humans

4 thoughts on “Stinking Cute Really Is The Best Description”