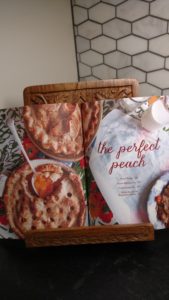 The magazine article was called Memory Keepers. It was the story of five women who preserved each of their individual family’s history by varying means.

The photographer decided she wanted to capture ordinary growing up moments of her three boys. So she took photos every single day. So now when the boys ask, “What was I like when I was little?” she has a photographic history to prompt memories of each day.

One woman, who had an abiding bond with her grandparents, made a large story box representative of their marriage. Vintage mementos, photos, and letters told a visual story of a happy life.

Christmas cookies played the leading role for Liz Spencer’s memory keeping project. For many years her grandmother Ruth baked about 500 cookies each Christmas and presented every family member with an individual container filled with the goodies.

Sadly, Ruth announced her retirement from baking (due to arthritis) on Christmas day 1999. Not wanting to lose the tradition, Liz’s dad took photos of each cookie which Liz used to paint watercolor images to go with each typed recipe. They made twelve books and gave them as presents the following year. The recipe book is, of course, called Ruth’s Cookies.

Another woman found recordings she had made of her grandmother THIRTY YEARS prior! Ersula Knox Odum was a young college student when she convinced her grandmother to be recorded. Grandmother Sula was a fantastic story weaver, singer, joke teller, and the reel-to-reel tapes are filled with her beautiful voice.

Ersula used the tapes to craft short stories about life with grandmother and these were later compiled to form the book At Sula’s Feet.

The final story was of a woman who took up quilt making at the age of 55. It took her five years of working a couple hours a day to complete the quilt’s 25 blocks. Each of those blocks holds a family meaning. The center displays a rendering of the Cape Cod home her parents built. Ten generations of relatives’ names are stitched into the border.

These stories have influenced me to expand my own personal recipe collection. Many of my recipe cards are old with fading print, which makes sense since some of them were typed on an actual typewriter! Some of my recipe pages are torn or have splotches.

My project is to type up each recipe in a larger, bold font and “scrapbook” them into a 3 ring binder. I’ll add photos and any stories or memories that go along with the recipe. Then on the back of the page, I’m going to attach the original recipe card or page.

So it will become a historical recipe book of sorts.

Sorry…not for sale. It will be a one-of-a-kind book.

But I’m hoping this post will give you some ideas to launch your own memory keeper project.