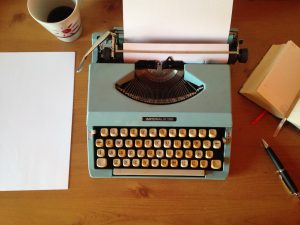 Actor Tom Hanks has an unusual interest: typewriters. NPR actually refers to his interest as a “well-documented obsession.” Hanks wrote the forward to a book titled (appropriately enough) Typewriters: Iconic Machines from the Golden Age of Mechanical Writing by Anthony Casillo.

Hanks’ own book Uncommon Type is a series of short stories that have a common element: at some point, a typewriter plays a minor part. I’m about halfway through the book and so far all the typewriters have been manual ones.

You had to press the keys sharply; otherwise the lever holding the metal letter wouldn’t reach the paper to imprint itself. Then you needed a good swing from your left arm to slap the carriage return lever when the bell sounded. The “ding” indicated you were at the end of the right-hand margin. If you want to know what typing on a manual typewriter sounds like, there’s a link at the bottom.

There was no auto-correct; errors needed to be erased or lifted off the paper by using correction tape.

In high school, both my sisters took the commercial course and that included three years of typing classes. The students were tested by use of a proficiency test. The testing allowed no correction of errors; for every error, a sum of five words per minutes was deducted from your score.

In the early 60s ONE electric typewriter was in that high school business classroom. Students were required to take turns using it one week of each grading period in order have at least some experience on the “new- fangled thing.”

Our parents bought my two sisters a Royal manual typewriter for Christmas 1960. It was baby blue and was contained within a large carrying case. On each side of the typewriter were mechanisms to lock it into place within the case.

So between the three years of business class and at-home practice on the manual typewriter, my sisters headed to DC to find work as secretaries.  Joining a secretarial pool in the federal workplace in DC, my sister Beverly discovered that manual typewriters were a thing of the past. “It’s electric, baby.”

In 1978 there was another big shift in the typewriter saga from electric to electronic. As with all electronic gadgetry, the price for the latest thing is hefty at first. Amazingly, in 1983 the list price of an electronic typewriter was around $795 according to a New York Times archive article from 1984. In 2018 dollars that would be around $2000.

How did businesses afford to keep up with the times?

When I got to high school half a dozen years after my sisters, my mother insisted that I include at least one year of typing in my class selection. I remember my mom saying that if I could type, I could always get a secretarial job.

She was right; I did initially follow in my sisters’ paths, although I didn’t end up in the metropolitan DC area until years later.  And I’m still here!

I have never regretted taking that typing class. Thanks, Mom.

Sound effect of a manual typewriter