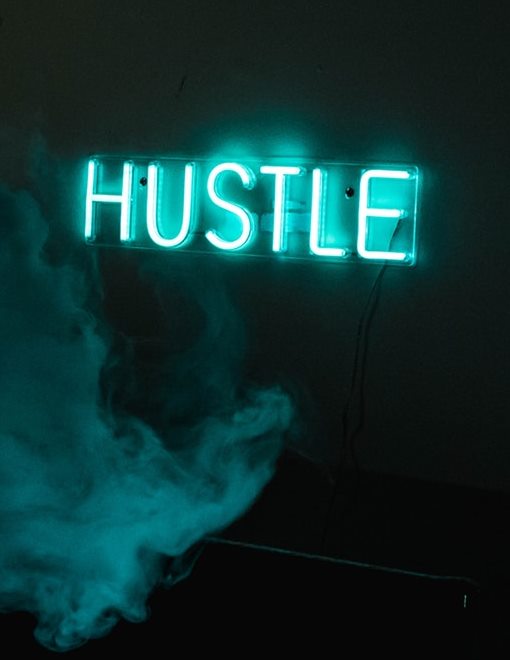 image courtesy of Tnarg on Pexels

Hustle is one of those words whose meaning has evolved from a negative one to a positive one in the business world.

The original meaning implied a fraud or a swindler or forcing someone to move fast and unceremoniously in a direction they may not have wanted to go.

In the mid-70s, the hustle was a term that collectively covered numerous disco dance moves. And of course, Van McCoy and the Soul City Symphony’s song Do the Hustle topped the Billboard Pop Singles chart in July 1975.

But in today’s business world hustle is viewed as a must-have attribute. Various experts have their own favorite meanings of the word. Here are some I found: tenacity, high energy, being an effective self-promoter, do whatever work it takes to create value, an ability to solve problems faster and better than anyone else, dream big and make it happen, risk takers, serve others, eliminate distractions, think way outside the box, be authentic, improve in some way every day.

I saw a hustler this week. I was standing in the meal pick-up line at Panera during a tremendously busy time. Over the medium-high counter where completed orders are placed, I could watch a few of the employees getting the orders together.

One young woman was simply amazing. Clearly, she was juggling getting the components of half a dozen orders just right. Looking up, down, sideways, requesting various people to pull this or that, she was a model of hustling efficiency.

I know I would never want that job because I could tell the work would stress me out after about two minutes. But that young woman seemed to be enjoying herself.

When my order was ready, I stepped forward to grab it and got the woman’s attention. I told her, “If my company was hiring, I would steal you from Panera because of the way you hustle.”

She beamed at me for about a second and a half and then went back to hustling and getting orders pulled together correctly.

So maybe we should each develop our own positive definition of hustle. No matter whether we work at a job or career or do volunteer work or take care of our grandchildren or pets…whatever our daily “work” is, let’s do it with joy and enthusiasm and pride.

Medium.com article on why being a hustler is imperative to succeed in business today

Jon Acuff’s take on those who use hustle incorrectly

Van McCoy and Do the Hustle