Mirror, Mirror…Just Don’t Let Me Catch You At It 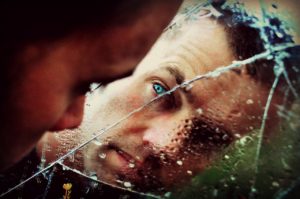 Are you aware of the communication/empathy/rapport building technique called mirroring?

Many of us do this naturally when we’re with people we’re close to. For instance, if I’ve just had lunch in a restaurant with a good friend, I might suddenly realize that we’re both sitting forward in our chairs, and we both have one hand over our other hand resting on the table.

Sales people are taught this skill, sometimes under other names such as matching. According to the website thebalance.com, mirroring is “when one person adopts the physical and verbal behaviors of another as a way to build rapport and agreement during the selling process. Although that may sound a little creepy, it’s subtle when done well and research supports its effectiveness.”

So if a prospect leans back in a chair and crosses one leg over the other, a person mirroring may, a few seconds later, adapt the same pose. We can match another’s rate of speech, use similar language or vocabulary, and move into the same positive body language. The key to success in using this to build rapport with another person is subtlety.

And yes, this can be used for nefarious purposes—to trick someone into liking you, for example. I trust my tribe of readers, though, so I know you will use this new power for good and not for evil.

When someone is mirroring me and doing it badly and obviously, sometimes just for laughs I’ll strike some odd pose such as laying my pointer finger along the outside of my nose and leaving it there for a minute. Just picture what someone copying that pose would look like. I don’t consider this mean; I’m just teaching them a lesson. Be subtle!

I recall when one regional boss in my corporate America career learned that one way to show people you’re really listening to them is to repeat back the last four to five words they’ve said. Again, if you really ARE listening to people and choose to use this technique, use it judiciously, not like the regional boss did.

There were about a dozen of us at the conference table, taking turns presenting options or ideas to solve some financial problem. After each person spoke a sentence, boss man repeated back the last half dozen words. The sequence was repeated over and over again.

I finally had to fake a nosebleed in order to leave the room because I knew I was going to burst out laughing if I listened to him perform this act of pompous stupidity one more time.

Mirroring can certainly build rapport. And it can be used for good purposes in many situations. Consider when someone calls a depression hotline for help. The caller is reaching out because of feeling sad and hopeless and may be brimming over with despair. The trained counselor doesn’t respond to the caller’s opening remarks with, “Oh come on….it can’t be that bad.”

No, the counselor moves down to mirror the level of the caller, asking questions that establish the meaning, “I understand. I feel your depth of pain. You’re not alone.” And only when the rapport has been established gently, hopefully the counselor can move up the emotional state of the caller a little bit at a time.

We can all use a dose of that kind of understanding every day.