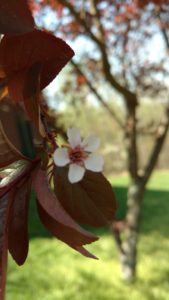 To Christians around the world, Palm Sunday through Easter Sunday is the most sacred eight-day period of the year. It’s called Holy Week and during it we recall Jesus’ final week in Jerusalem.

Late Thursday night after Jesus and his disciples had their last supper, they walked to the Garden of Gethsemane. Saying that he was “exceedingly sorrowful,” Jesus took three of the disciples (Peter, James, and John) into the garden with him.

Jesus left those three with instruction to “keep watch” while he went farther into the garden to pray alone.

During the middle of this night, Jesus knew what was coming—betrayal, mocking, a beating nearly to the point of death, six hours of hanging in agony on a cross before dying—and being human, he was frightened. He prayed fervently to God the Father to step in if possible, but ended with, “Thy will be done.”

When Jesus checked on the three, he found them sleeping instead of keeping watch. He woke them and admonished them and again asked that they keep watch while he went back to pray alone.

Twice more the inner circle of Jesus’ best friends failed. And then it no longer mattered because the betrayer and “a great multitude with swords and clubs” came to arrest Jesus. Fearing for their own lives, the disciples scattered.

Our Episcopal church service on Thursday of Holy Week is exceedingly spiritual. It ends in near darkness as the lights are lowered while the altar is stripped bare, every cross is covered in black netting, and one by one the candles are extinguished except for one.

We are invited to follow a candlelit procession into the garden courtyard to sit and keep watch with Jesus for awhile. I mindfully paid attention to my emotions and reactions.

First, in our busy world, it feels unusual to sit with others in complete silence. Don’t we typically feel the need to fill the silence? Someone is always talking. Silence with others is a rare experience, but oh so beautiful.

As I thought about the disciples’ inability to stay awake to keep watch as well as their hiding when the authorities came, I felt tremendous sadness. At a most crucial point, Jesus is abandoned by his friends of three years while his other followers, including his mother, are asleep, unaware of what’s transpiring.

My town is relatively small and our church is not on the main drag. Yet the courtyard faces a street so the common sounds of life went on about us.

Cars drove past, a siren wailed in the distance, and the murmur of outside voices at a restaurant could be heard. It served as a reminder that no matter what we are personally experiencing, life goes on. Others can be totally unaware of what anguish we’re going through.

And there was the lights and shadows observation. As cars’ lights from an adjacent side street reached the courtyard, the shadows of the newly blossoming trees along the garden’s edge appeared as works of art on the outside chapel wall.

Then one car’s lights, perhaps on bright, lit up the chapel wall from the top moving downward as though a stage curtain was descending in slow motion. It seemed to signify, “This part of the story is over for now. It’s time to go home.”

But we do not stop keeping watch. Because we must be the ones whom our friends, family, and community can count on to be with them when they are frightened, alone, upset, or (like Jesus) exceedingly sorrowful.

To my readers: Please share a spiritual moment you have observed during the Lent and Easter seasons of your life.