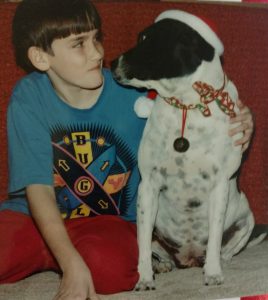 In November 2004 we made the difficult decision to put down our beloved family dog of thirteen years. Like most old dogs, Cupcake had developed many physical problems. She endured twice daily insulin shots for diabetes. Minimal pain medication for her aching joints had to be carefully monitored as it could have further damaged her ailing liver. Cupcake’s clouded over eyes severely limited her vision. She was nearly deaf as well, and she often became confused, appearing to not know where she was.

We no longer put her on a leash for walks since there wasn’t a risk of her running off. She loved to be outside; rooting around near the trees and bushes smelling for squirrels and other dogs. I usually lingered slightly behind her, letting her enjoy herself. At some point, she would look up and her body would stiffen. I knew she was afraid that she was lost and alone outside. She would stand frozen until I came up to her, touching her gently, saying her name and telling her I was there watching over her. I swear I could see the relief that flooded over her old body. Soon, and with a little spring in her step, she would continue on her way.

It dawned on me that most of humanity ends up like Cupcake. Our eyes become so filled with visions of “things” we want that we lose sight of what God wants for us. Our ears turn deaf to His voice when we are too caught up listening to the busyness and needs of our daily lives. We stumble along and are suddenly frozen with fear that we’re lost and alone. Then God touches us gently, speaking our name, and gives us loving reassurance that He is there beside us, watching over us, loving us more than we can possibly know.