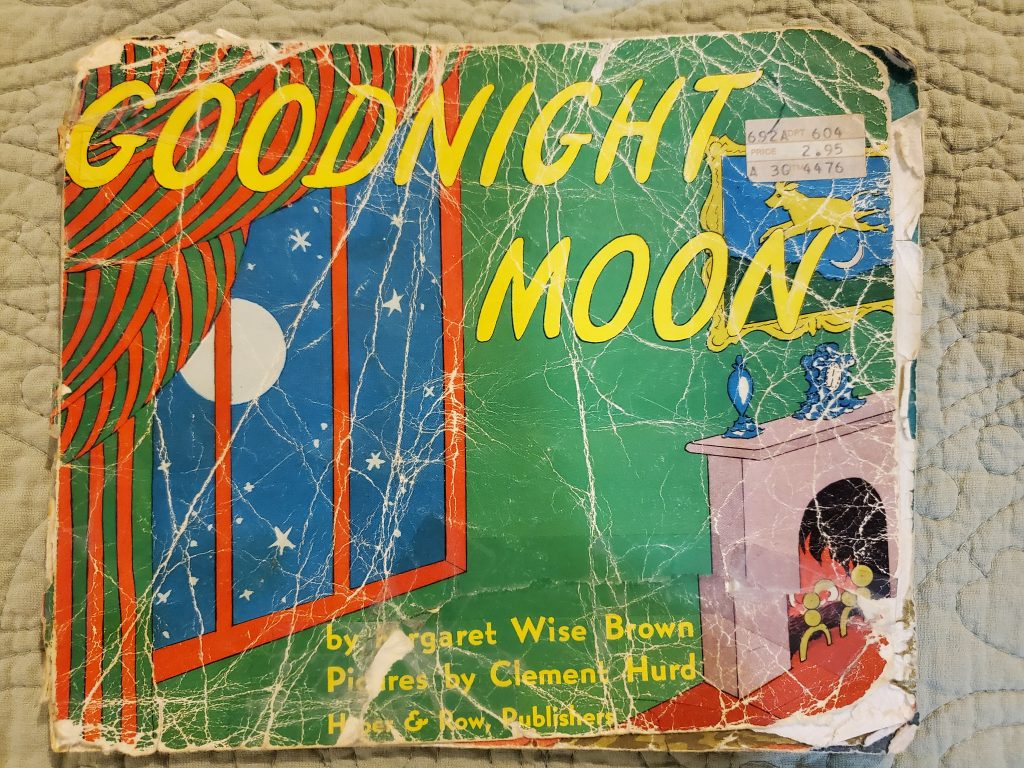 Have you ever read a book so many times that it literally starts to fall apart? As you can see in the photo, such is the case with my children’s copy of Goodnight Moon by Margaret Wise Brown.

First published in September 1947, total sales have reached over 48 million copies. It’s identified as a calming story to get very young children ready to go to sleep. Having a routine of looking around the bedroom, seeing beloved objects, and saying goodnight to each one is reassuring to a child.

But did you know that this book goes against many of the current recommendations given for writing a best-selling children’s picture book?

So against all odds, young children love this book. Mine both did. When we took long car trips and the children got restless, I would turn to the back seat and tell it from memory. I guess that’s why I can still recite it word for word.

In our copy of the book, on the “Goodnight nobody” page, we taped a photo of my daughter Laura’s favorite stuffed monkey named Georgie. He’s “hanging” from a bunch of bananas at Longwood Gardens. (You can see me in the background holding baby Laura.) So when we reached this part of the story, instead of saying, “Goodnight nobody,” we said, “Goodnight Georgie.”

When I was doing research for this article, I came across some opinions about the book that were a tad unsettling. One writer feels this book is about a bunny that is AFRAID to go to bed and so is stalling by naming things in the room. How dare you?!

Another author brought up the safety issue of an open fireplace without so much as a screen in the bunny child’s room. One guy wondered why a bunny would have a tiger pelt rug in the room when tigers EAT bunnies.

Someone else wondered why the bunny is sleeping in the mother’s room. She believed that to be true because there is a phone on the nightstand and a rack with laundry drying; who would have that in a child’s bedroom? And some wondered just who that old lady is? Grandma? A babysitter? A nanny? One minute the chair is empty, the next minute, there she is. And then she’s gone again, with just her knitting left behind.

It just goes to show that you can pick anything apart and find fault or at least put forth comments or questions to stir the pot.

Speaking of stirring the pot, I wonder if that bowl of uneaten mush will go bad before morning? Maybe the mouse in the story eats the entire bowl and then falls to sleep while resolving to get back on its diet in the morning.