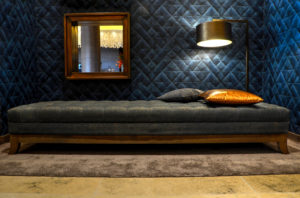 My November 1 post talked about Fallingwater, the architectural masterpiece by Frank Lloyd Wright, and the fact that his most famous creation does not have one of his red signature tiles. See below for a reminder:

Most Frank Lloyd Wright homes include his signature on a Cherokee-red tile affixed to the outside. For some reason, Fallingwater does NOT have one. I have someone looking into that. Seriously. You may be one of those people who is aware that my most quoted phrase is: It never hurts to ask.

I’ve heard back from Scott W. Perkins, Director of Preservation at Fallingwater. Here is his response via email:

“The red signature tiles were not added to all of FLW’s buildings. There is a myth that they were a “stamp of approval” or that they somehow marked his “favorite” buildings, but in reality they were added to the buildings after 1951. The tiles were designed by the mother of an apprentice, Aaron Green, and the original order was for 50 tiles. After Wright’s death, homeowners could still get a tile, as was the case for the owners of a Chicago-area prairie house and the First Christian Church in Phoenix, which was completed in 1972. The tiles were designed during the height of the Usonian phase of FLW’s career, so Kentuck Knob has one, and explains why Fallingwater does not.”

If you’ve toured Fallingwater, you know that the main family/living room has LONG, straight built-in seating. I found this really odd, since this style is not conducive to holding productive conversations. The set-up has people sitting in a long row, side-by-side, like the keys on a piano. I asked Mr. Perkins about that as well.

“The banquette seating (which I think you meant by “straight-line” seating) was not unique to Fallingwater, and Wright used it in many houses prior to it. Built-ins were more difficult for clients to move around, Wright felt.”

Although an amazing visionary, Mr. Wright was also known for his stubbornness. If he didn’t want the homeowners to change something that he truly believed in, he had ways to make sure they couldn’t!

I recall on a tour at Kentuck Knob the docent told our group that the owners (I.N. and Bernardine Hagan) wanted more storage space. Mr. Wright disagreed. So they had to wait until the house was finished before they could add it. And according to Kentuck Knob: A True Masterpiece by Ashley Dengler, “There were several debates and arguments between Wright and the Hagans over furnishings.”

So the moral of this post is we need to remember that no matter how smart or talented we are, it’s good to listen to another point of view and consider a mutual compromise. And then still do it your way, if you’re Frank Lloyd Wright.

To my readers: Do you have a story to share about digging in your heels over an issue? How did it end?