Note: This post is based on my 2007 Christmas letter. 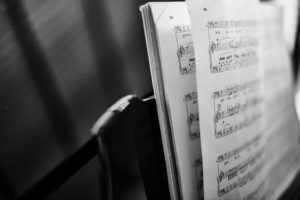 The dream was one of those vivid ones, just before waking, that remains clear and memorable. I was sitting on a folding chair in a circle with about ten other people. The only other person I recognized was my brother-in-law Bill. Each person in the group would sing a song a cappella, then the rest of us would politely applaud. It seemed quite formal.

My turn came and I began to sing the first verse of Amazing Grace. But instead of sitting quietly and letting me have my turn, the group began to sing along with me. This thrilled me instead of upsetting me that I didn’t get my fair turn. When we came to the end of the first verse, I turned to Bill (who is a talented musician). “How does the second verse begin?” I asked him. “Just get me started on the first couple words then I’ll be ok.” I was eager to keep the singing going.

Bill professed not to know how the second verse started. I argued with him that he indeed should know. Then, as dreams go, we conveniently saw a corner table piled high with hymnals. Bill and I went over to look up Amazing Grace. We couldn’t find it in the hymn title index. “Look at the first line index,” I implored him. “Maybe it’s not called Amazing Grace, but I know that’s how it starts.” The dream ended in frustration, unable to find that for which I had been so diligently searching.

Fast forward to real life: That very day there was a memorial service for a neighbor who had died relatively young and unexpectedly. The funeral home was packed with people when I arrived, and I sat about halfway down the last row of folding chairs. Just before the service started, I could see that papers were being passed around the room and assumed they were programs for the service. I watched the sheets of paper being passed from person to person, down one row and on to the next. As they came down my row, the man next to me took his and handed me the very last sheet. It was the hymn Amazing Grace.

I sat there, stunned. Surely there was a message in this for me. Maybe it was that I had been trying to earn God’s grace, when grace, by its very nature, is unmerited. I don’t have to search for it; it’s there for me in the uplifted arms of the baby in the manger, the outstretched arms nailed to the cross, and the encircling arms of the risen Lord. All we have to do is accept that grace. It is ours, unearned. Amazing!

To my readers: Have you ever had a dream that carried over into real life?