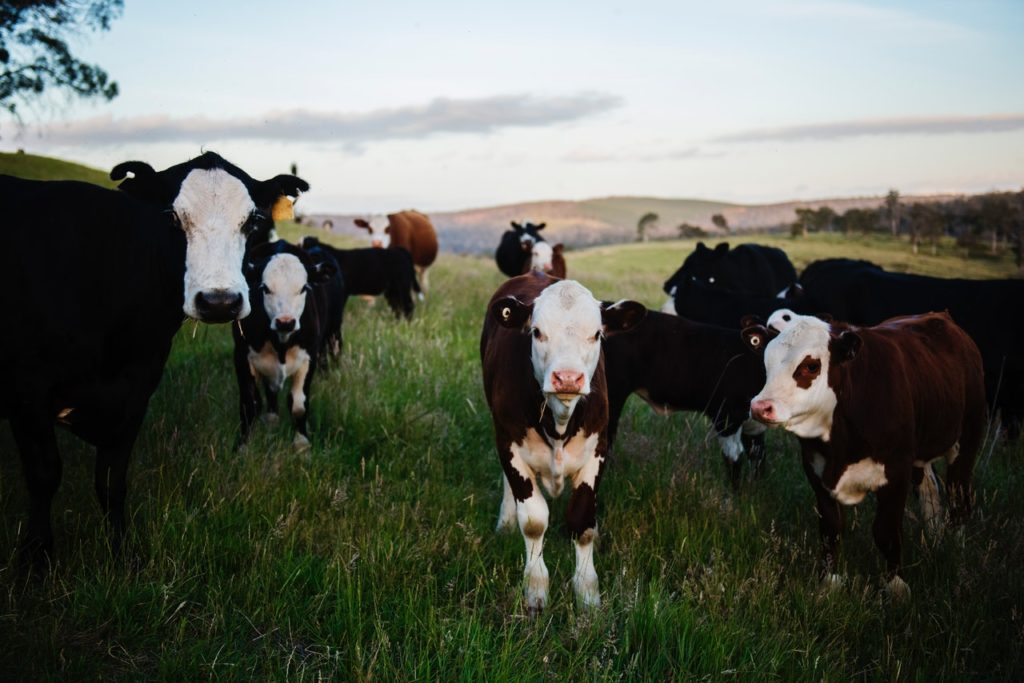 My friend Betsy had a long-ago dog (named “Dog”) who had one mortal enemy: cows.

I guess I should have termed that “bovine enemy” to stay within the confines of correctness.

Dog would bark from the car at every single cow they passed in the fields of rural Pennsylvania. His parents, believing at the time that it was cute, encouraged the behavior. It reached the point that one had only to look out the kitchen window and casually utter the single word “cow” to bring on a frenzy of Dog’s ferocious barking and pawing to get out.

Dog would not have been a good walker at Rady Park where Grace the beagle/foxhound and I walk daily. A long edge of Rady is adjacent to one of several fields where the neighboring farmer lets his cows graze. Often the cows will come close to the fence to peer down into the park to see what’s going on.

Grace did bark a bit at the cows when we first adopted her two+ years ago, but I reinforced the phrase “good cows/no barking” as I stood beside her and patted her flank. Now she hardly gives them a second glance UNLESS a particular circumstance occurs.

Grace tenses up and growls when a cow stares at her and starts moving toward her at a cow’s pace, continuing to stare the entire time. It IS creepy, I admit. But cows stare at us and walk toward us because 1) the cows are curious and 2) they are attempting to determine whether or not we are a threat to them.

This morning Grace was ignoring the cows roaming the pasture but tensing and growling at a stand of trees. It was only when I looked more closely that I saw some medium size calves were camouflaged behind some hay bales in front of the trees. And yes, they were staring. They had even stopped chewing. They were no threat to anyone but it sure as heck made Grace feel uncomfortable.

Sometimes we’re like Grace. Afraid of something, but not quite knowing what or why. We get nervous about a situation without being able to identify what’s causing the reaction.

I don’t recommend living a life of fear, and yet I’ve learned that when those feelings appear I need to consider what’s going on instead of just admonishing myself with a “Are you kidding? Grow up, you baby,” response.

Gavin de Becker’s 1997 book “The Gift of Fear: Survival Signals That Protect Us from Violence” is as relevant today as it was 25 years ago. It’s likely even MORE relevant today with the craziness that goes on in our world.

So while it’s highly unlikely you will ever need to protect yourself from a staring cow (even though it’s the epitome of creepiness), de Becker’s advice may someday save your life as it did mine.

Is there meaning to a cow who stares at you?

The Gift of Fear: Survival Signals That Protect Us from Violence