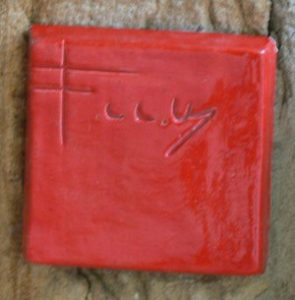 I’ve visited Fallingwater, the architectural masterpiece by architect Frank Lloyd Wright, half a dozen times. Each time, I see something new or absorb a different slant on an aspect I noted previously.

If you’ve never seen it, you owe it to yourself to take the tour. The home is located in southwestern Pennsylvania and is built over a waterfall. That wasn’t a typo. It’s not “next to” or “close by” a waterfall; the waterfall seems to become part of the house.

Most Frank Lloyd Wright homes include his signature on a Cherokee-red tile affixed to the outside. For some reason, Fallingwater does NOT have one. I have someone looking into that. Seriously. You may be one of those people who is aware that my most quoted phrase is: It never hurts to ask.

I mean, Fallingwater is Wright’s most famous work so why doesn’t it have a signature tile? I held on live chat while someone at the Wright foundation researched it. They finally said they didn’t know the answer. I admire people who admit they don’t know something, and this “chatter” receives extra kudos because she referred me to someone else. BUT….this mystery will remain unsolved for now since the second researcher is out of the office for a week.

I like the idea of a permanent mark considered in a positive way.

Since I designed my own home, one of my aspirations for the future is to come up with some type of tile with my signature which can then be affixed to the outside stonework.

But more importantly, I’m hoping we each leave a positive permanent mark on the people who show up in our lives. Those of you with young children and grandchildren have many opportunities to demonstrate how to live a life that matters. But influence doesn’t end with childhood. We just need to have open eyes to see the opportunities.

Last week in class my adult students were learning how to speak on an impromptu basis by randomly choosing from an envelope one word out of dozens I had chosen for the purpose.

One young man pulled the word offer. He told our class the story of growing up and driving to church every Sunday with his parents. Sometimes on the way home, they would see an individual walking alongside the road. His father would stop the car, and the young boy would get out and offer the stranger a ride.

It didn’t matter if the stranger’s destination would take the family out of their way. The father was happy to perform this small kindness.

Fast forward to current day and the boy is now grown up and drives his own truck. He said that last week on the way home from work, he passed a stranger walking alongside the road. He zoomed past him, ready to get on with his own plans for the evening. And from somewhere, he remembered his father’s unfailingly consistent and kind offers of a ride.

He made a U-turn, went back and made his own offer to the walker who accepted it gratefully.

My student got a little choked up about the telling of this story to a group of strangers. But it resonated with us and brought us all a little closer. That’s the power of a permanent mark left on us. You just never know how or when it may get passed along to someone else.

To my readers: What permanent mark do you feel you’ve left on someone’s life?