A Pebble in a Pond 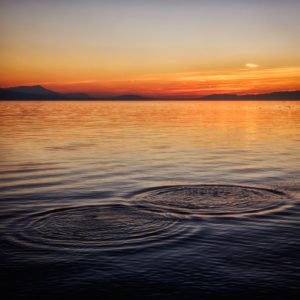 Photo by Olivier Fahrni on Unsplash

A great teacher once challenged me to consider the effect caused by tossing a pebble into a pond.

While it’s calming to watch the ripples in the water gently moving outward from where the pebble entered the pond, most of us watch for a while, and then move on.

But think about those tiny surges we set in motion by that one action. The rings move outward and onward until they touch the shore on the other side with an almost silent splash.

The teacher suggested that we are the pebble and the pond represents our life.

We show up (enter the pond) and the initial ripples we create, the strongest ones, are the people whose lives we touch the most.

Those would be our immediate family, our close friends, the people we strongly interact with every day at home or school or work or the neighborhood.

The next outward-bound ripples are the people we still interact with but not as frequently or closely as the first set. These would include casual friends, our child’s teacher, or extended family we don’t see or talk to regularly.

The third set is still part of our universe but even further removed such as people we know to speak to (a clerk in the grocery story, the mailman) but who do not play an active role in our life.

We have an effect on all of these people by how well we treat them. Regardless of which set they’re in, when we interact with people, we have an influence on them.

But there are many more rings still extending across that pond.

They represent the people who are influenced by the people from our rings.

Think about that: You have an effect on people you don’t even know.

When I taught this lesson to middle school students at the Boys and Girls Club, I used my husband as an example.

Spending twenty years as a volunteer paramedic in our town meant that my husband interacted briefly with many people he didn’t know and never saw again after the emergency.

I told the kids a story of his saving the life of a teenager who had been trapped inside a crashed car. The boy recovered and went on to live his life. Think of the people in the boy’s circles who were influenced by my husband because without him, the boy likely would have died.

Every single person that boy (now grown up) ever impacts the rest of his life goes back to the moment when he appeared in a ripple in a certain pond.

And everyone in the boy’s life goes on to influence their own set of people, and so on and so on.

We each have a tremendous responsibility to be the best person we can be to the world at large. The pond is depending on us. Love is the only answer.