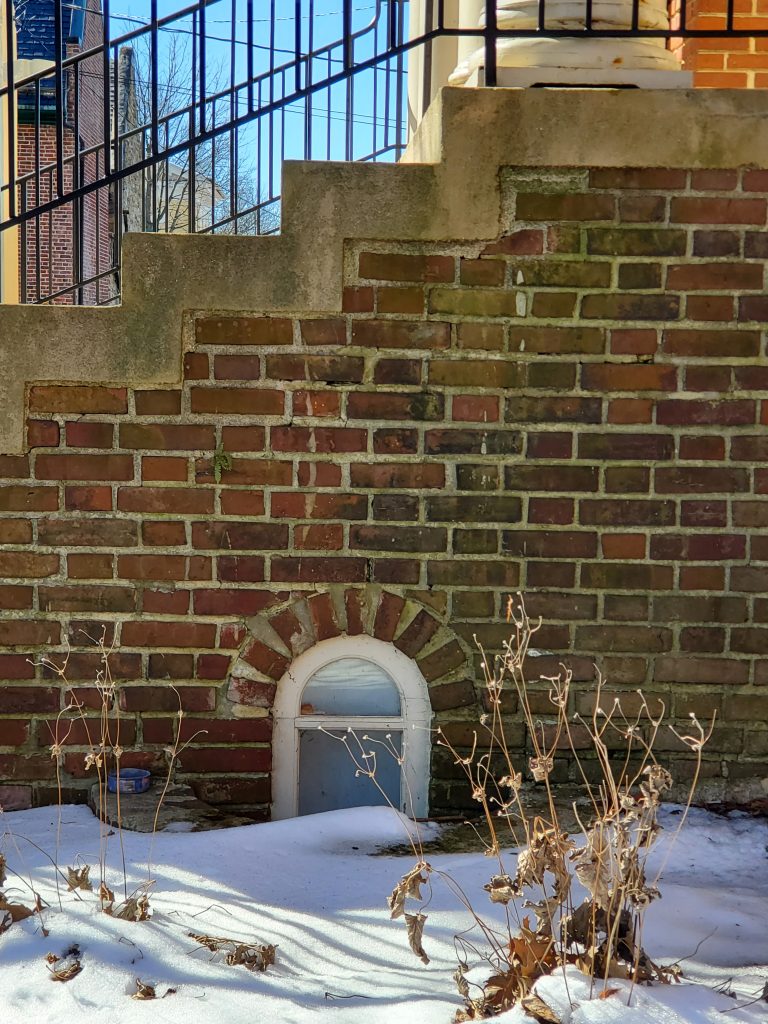 Forgive me if I’m repeating myself from a past blog, but my favorite public space in my home is the smallest room in the house, the breakfast room, just off the kitchen.

A strong reason for its appeal is the amount of light that pours in through its two large picture windows. For most of the year, the windows are unadorned of any covering. But because they face west, in the heat of an afternoon summer, that light needs to be blocked because it’s just too strong.

I got to thinking about windows on a walk through Old Town Warrenton yesterday. My dog Grace likes to walk up and down steps, so when we reached the John Barton Payne Building (a historic old building that housed Warrenton’s first library), I let loose of her leash so she could bound up the steps.

After she moseyed back down, Grace decided to snuffle the bushes off to the side of the steps. That’s when I saw the teeny-tiny window pictured above.

Now I’ve lived in this town for about thirty-four years, and I’ve been to the John Barton Payne Building many times for meetings, lectures, and with my children and (later) my grandsons when, during the Christmas season, Gum Drop Square was hosted there.

But I had never before noticed this charming window that looks out directly to the ground on which the building sits.

I wondered what may have prompted the architect to add this opening to the world in such an odd spot. When public places are open again, I plan to seek entrance to the space to see where the window fits from inside.

We vary as individuals as to how much light we’re comfortable with in our surroundings. As a natural light enthusiast, I detested the few years my work office was along an inside wall of the building. When building renovations were done and my team and I moved to new digs, I was thrilled to have my desk facing a large window.

As our life moments ebb and flow, we may need more or less light. If, for instance, we’ve just come through a dark period, too much light at once can feel overwhelming. Imagine an ebullient person on the counseling end of a suicide prevention hotline who heartily responds to a despondent caller by saying, “Oh come on, cheer up. It can’t be that bad!”

No, we know that would an inappropriate response. While the person in darkness doesn’t need more darkness, neither does she need a picture window’s worth of light shined upon her like a spotlight.

Instead, maybe what would be most helpful is just a candlelight’s glimmer of hope or a supporting night light’s beam to light the way between spaces of then, now, and tomorrow.

And when she’s ready, the light of a new day casting rays through the panes of a teeny-tiny window may be simply perfect.

Oh My Soul, You Are Not Alone by Casting Crowns

2 thoughts on “A Little Bit Of Light”