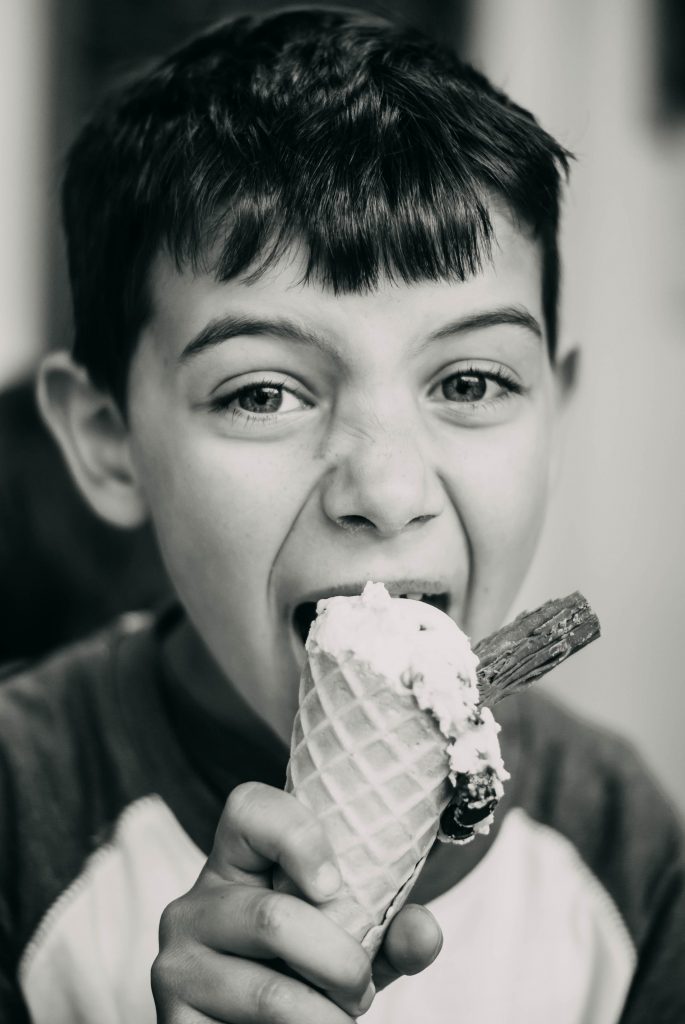 What’s your favorite brand and flavor of ice cream? Mine is homemade butterscotch  ice cream by Little Man Ice Cream. I’ve eaten it a total of ONE time. Here’s the problem: Little Man is in the Denver area and I live in Virginia. I know I have at least one reader in the Denver area. Please…go have a scoop in my honor.

My husband and I were on the Amtrak California Zephyr traveling from Chicago to Sacramento. The only place the train stopped long enough for passengers to disembark was Denver’s Union Station. It was a  warm afternoon, and we had about two hours before the train would pull out.

Inside the train station, we found Milkbox Ice Creamery which sells Little Man ice cream products. Among many tantalizing flavor options was butterscotch.

I think I embarrassed my husband. I kept moaning in ecstasy as I placed one delicious spoonful in my mouth after the other.

I didn’t want the moment to end. It was a dessert to remember.

We had an earlier dessert moment in Yellowstone National Park in the early 1980s. On a prior trip to Yellowstone, we had eaten at a restaurant that had the best homemade apple dumplings ever. EVER. We couldn’t recall the name of the restaurant on this subsequent trip so we kept driving around the general area hoping we’d remember it when we saw it.

Finally, a park ranger informed us that the place we were searching for had burned down the year before. Noooo! Say it isn’t so!

Years later in 1992 when I told my good friend Cindy this story, her face lit up. She was willing to share her mother-in-law’s apple dumpling recipe which she felt sure would tickle our taste buds. It did and still does.

Cindy gave me the OK to share her late mother-in-law’s recipe with my readers. So from Mary Grace’s best recipes collection, here it is with my adjustments. Because I don’t know about you, but I tweak most recipes.

I’m starting off with a few advisories:

Before you work on the apples, start the syrup on the stovetop in a saucepan. Since we like our dumplings very juicy, this is double the amount that Mary Grace used:

SYRUP:  Combine 2 cups of water, 1 cup granulated sugar, 2 teaspoons of butter, 2 teaspoons of cinnamon, and a dash of nutmeg in a saucepan. When you’re ready to pour the syrup over the dumplings,  bring the mixture to a boil over medium heatand let boil one minute.

DUMPLINGS:  Cut each of the two crusts in half so you have four pieces.

Peel, core, and cut the apples into medium to large bite-size pieces. Divide them up among the four pieces of piecrust, placing the apples in the middle of each piece.  Sprinkle a little granulated sugar, a bit of cinnamon, and add a “pat” – one teaspoon – of butter on top of each dumpling.

Then fold up the edges of the dough to cover and seal in the apples. Don’t overstuff each piece of dough; doing so will cause the dumpling to break open while baking.

Place the dumplings in a 9×13 cake pan. Four fit nicely in this size pan.

Now gently pour the hot syrup directly over and around the dumplings.

Do not cover. Bake at 400 degrees for 40-45 minutes until the dough is lightly browned.

Serve warm with a spoonful or two of that tasty syrup poured over your dumpling and then add a scoop of vanilla ice cream.

Trust me…this too is a dessert to remember.

Hmm…I wonder how dumplings would taste with butterscotch ice cream?

2 thoughts on “A Dessert to Remember”