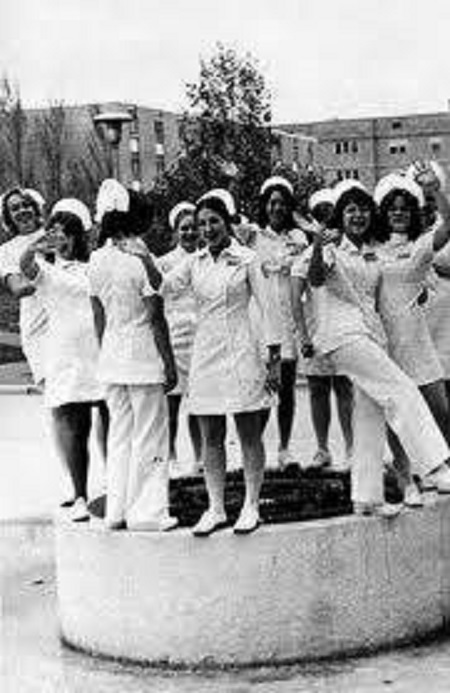 What WERE my parents thinking? I was just shy of 16 and so naïve and innocent that anything could have happened to me. But they blithely put me on a train by myself in Johnstown, PA, bound for Chicago for a vacation with my sister. (See post from May 16.) That was a scary 12+ hour train ride.

The trip was supposed to have been my first flight in an airplane, but starting July 8, 1966, the five major airlines were shut down by an International Association of Machinists Union strike which lasted 43 days.

Fortunately, I arrived unscathed, only to find that Chicago was in the grip of civil rights riots on the west side of the city. Starting July 11, fires and looting prevailed until finally the National Guard was called in.

And then on July 14 as my sister was getting ready for her last day of work before our vacation began, the early morning radio news was blasting a horrifying story: During the night of July 13, a 24-year-old man named Richard Speck had gained access to a housing unit for student nurses from South Chicago Community Hospital and murdered eight of them.

He controlled the six young women already in the apartment with the use of a knife. One by one, he tied them up. When three more girls came home later, he was able to subdue and bind them as well.

Over the course of about four hours, Speck took the girls, all in their early 20s, individually to different areas of the apartment and killed them. The girls were either beaten or strangled. One was raped before being murdered.

Corazon Amurao, a petite 5’2” nursing student, managed to roll her bound body under a bed while Speck was out of the bedroom killing one of her friends. He must have lost count of the total number because he did not look for a missing girl.

When he eventually left, Corazon freed herself and crawled to a second-story ledge and began screaming for help.

Within two days Speck had been located and arrested. His prominent tattoo Born to Raise Hell was one of the markers that aided in his quick capture. At the trial Corazon positively identified Speck as the murderer; that testimony plus his fingerprints found at the scene led to a slam-dunk conviction.

Richard Speck died in prison at the age of 49; he suffered a heart attack. Throughout the years, he offered up no remorse for his killings.

I remember my 16-year-old self being terrified the entire day of July 14 as I waited alone in my sister’s apartment. I knew one thing for sure; I would not answer the door for anyone.

When as a teen I thought about those young student nurses, I never questioned WHY they would be so gullible, so passive, so willing to just let that man take complete control. It was because I had been raised the same way. “Anything to keep the peace.”

I would hope that if (God forbid) a similar situation would occur now, a group of girls or young women or even old women would ferociously fight back and overpower the evil among them. You can count on me to do just that.

This story is dedicated to the memory of those slain nursing students: